In recent years, all things Dia de Los Muertos have become increasingly popular. You can find Mexico’s iconic imagery everywhere — from toilet seats to tattoos and even used as a popular wedding theme.

Although I think its wonderful that cultures all over the world are not only embracing something inherently Mexican,  as well as some death positive imagery, there is also a great deal that is getting lost in translation. Most people recognize that Dia de Los Muertos is a communal occasion on which families honor their deceased relatives however, Mexico has a far more complex and important story to share about this sacred tradition surrounding death.

In order to understand and appreciate this long held observance, we need to delve a little into Mexico’s history. First, we must acknowledge the foundation laid by Mexicas, the indigenous peoples of Mexico, who have demonstrated through archaeological and ethnographic evidence, that they possessed extremely complex ideas and practices about death and the dead. These are especially evident as you begin to explore their mythology and creation stories.

Before the Spaniards came along, the Indians were already observing a set of festival months, referred to as “The Little Feast of the Dead.” These involved ritual offerings to the dead and the God of Death as well as feasting. Aztecs and Mexican Indians have demonstrated through archaeological and ethnographic evidence, that they possessed extremely complex ideas and practices about death and the dead. These are evident as you begin to explore their mythology and creation stories.

Much has been written regarding the horrors of the Spanish conquest of Mexico. What I want to highlight from this period is the incredible tenacity the Mexicas exhibited when it came to maintaining their death rituals and relationships with their dead. Although the church gave the directive to eradicate their “pagan” practices surrounding day of the dead festivals under severe punishment and torture, in practice, it didn’t go down like that. In reality, the local Friars were profiting off of the lavish offerings intended for the dead. Clothing, money, household goods and incredible amounts of food were all being taken by the church for personal use.

It seems as though this specific tie to their established traditions surrounding death particularly infuriated the Spaniards. Perhaps because it was the one thing the church had not been able to control – try as they might. 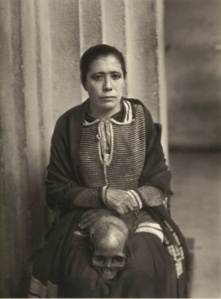 As time went on the Spanish attacked with a renewed fervor by introducing burial in church graveyards, creating laws controlling and abolishing many funerary and mourning practices, created a grave tax, and in the late 1700s issued a series of laws that included the following edict:
“The use of food and private banquets on burial days, during funerary commemorations or on the Days of the Dead is absolutely forbidden and reproved.”
Their goal?
“So that these abominations can be entirely uprooted.”

There is the incorrect belief held by many that Dia de Los Muertos is a “church created” or “Catholic holiday” – it existed long before the church came and continued to thrive, in spite of the church. As with many pagan holidays, Dia de Los Muertos was transplanted to All Soul’s Day and All Saints Day in an effort to “uproot” the “abominations.” Luckily, it didn’t work out as they had hoped, although you can certainly see the influence of these church mandated days in modern Dia de Los Muertos observances. 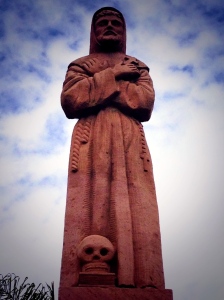 With this almost constant siege from outside sources specifically targeting the Mexican’s relationship with death; it becomes evident that this was something of immense importance to them, something that defined them and stirred their souls in a unique and important way. Mexico, for centuries has fought to maintain and cultivate this intimate relationship with death.

Octavio Paz, a Mexican writer and diplomat, describes the Mexican’s special relationship with death in his “Labyrinth of Solitude” as follows:

“To the inhabitant of New York, Paris or London death is a word that is never uttered because it burns the lips. The Mexican on the other hand, frequents it, mocks it, caresses it, sleeps with it, entertains it, it is one of his favorite playthings and his most enduring love. It is true that in his attitude there is perhaps the same fear that others also have, but at least he does not hide this fear nor does he hide death; he contemplates it face to face.”

In Part II I will cover the origins of the iconic imagery and symbols of Dia de Los Muertos – sugar skulls, La Catrina and what exactly happens on the days when the dead return and of course, a heavy emphasis on food.

All images used are work of the author, unless otherwise noted.

Manuel Aguilar-Moreno,  Handbook to Life in the Aztec World, 2007

Claudio Lomnitz, Death and the Idea of Mexico, 2008

Elizabeth Carmichael and Chloe Sayer, The Skeleton At The Feast, 1991

This entry was posted in Uncategorized. Bookmark the permalink.